Ending the Deferred Action for Childhood Arrivals (DACA) program would be wrong for California and for our nation. The program began in 2012 to prevent deportation of undocumented children who were brought to the U.S. by their parents, temporarily giving them permits to work and study here.

Rescinding protections for these young people would be a reversal — and a broken promise. It would jeopardize the fundamental values of our country and violate the spirit of America’s promise of opportunity for those who work hard to create a better life for themselves and their families. And it is yet one more example of efforts to vilify and divide people for political gain.

Even worse, ending DACA would put these young people at risk for deportation and will only drive immigrants further into the shadows. These actions threaten our economy, our public safety (stoking fears that keep immigrants from seeking police help), and strips these young people of their ability to contribute, to live the American dream, and to thrive.

I don’t typically weigh in on political matters, particularly those at the federal level. The James Irvine Foundation is focused only on California, and we seek to be nonpartisan, solutions-oriented partners for anyone who can help us expand opportunity for Californians. We remain committed to those principles, but we also will call out unfair, unwise actions that threaten the values we hold and the people we aim to serve.

Since it was first implemented, DACA has benefited hundreds of thousands of young people brought to the U.S. as children. Many recipients now have access to public universities, trade schools, and scholarships. That is why DACA enjoys support from both political parties, leaders in business, labor, education, and more.

Research has shown that DACA recipients will contribute $460 billion to the U.S. gross domestic product over the next decade. The implications are especially dire for California, home to 216,060 initial DACA recipients — the highest in the nation.

Since 2013, when Irvine’s Immigrant Integration initiative began, we’ve provided more than $12 million in grants to ensure immigrants have full access to economic, civic, and other opportunities. This ensures paths to prosperity for individuals, families, and the state as a whole — a state that has become rich in resources and culture because of immigrants.

And since 2014, Irvine has provided more than $1 million in flexible funds to a variety of organizations to support implementation of DACA. Although some early planning grants moved forward, other grants were stalled because of a 2014 lawsuit filed by Texas and 25 other states in a federal district court to stop DACA’s implementation and the creation of Deferred Action for Parents of Americans and Lawful Permanent Residents (DAPA).

In light of threats to DACA, we are exploring emergency funding options to assist our grantees doing critical work on the ground. And moving forward Irvine will remain a steadfast partner, supporting our grantees and others who fight for the protections and rights of all Californians.

As a private foundation, we know that we can best stand up for fairness and opportunity by supporting nonprofits who are serving Californians and their communities. But we also want to speak out, in solidarity, with all those who are equally troubled by the divisive, detrimental policies and rhetoric coming out of Washington.

From the President Protecting Immigrant Rights 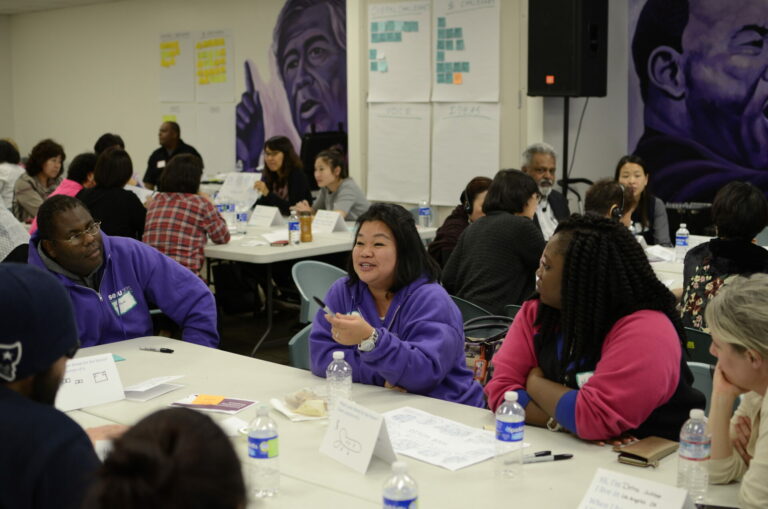